Angular is a framework for building web applications, but it is increasingly used for developing mobile applications as well. It allows automatic synchronization on the line model-view, so it reconciles the ideas of JavaScript with the MVC model (Model-View-Controller). In addition, Angular works well with other popular frameworks, including Ionic, which allows you to create hybrid mobile applications for iOS and Android devices.

A little history of Angular

The Angular framework was released in May 2016 by Google. Initially, it was supposed to be a successor to the previously popular AngularJS framework from 2009, but due to the lack of backward compatibility, it eventually became a separate platform. Right from the start, it received a lot of positive feedback from the developer community. Its main advantage is its speed, so a significant number of web developers started using Angular in their projects.

Before Angular became popular, the web markup language was static, which meant that users could not interact with interfaces on HTML pages. Of course, there were several ways to create dynamic Single Page Applications (SPAs), but they were complicated and very time consuming. It wasn’t until the Angular architecture that programming efforts were reduced. 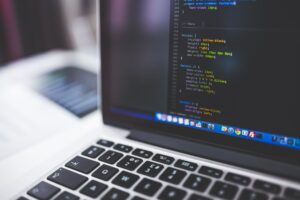 Why should I use Angular?

The versatility of Angular and its architecture make it very popular among developers in recent years, and its knowledge is desired by employers. However, popularity and support by a large company are not the only advantages of Angular. What else is worth paying attention to?

Angular was written and completely supports TypeScript, which is an extension of JavaScript. TypeScript provides advanced autocomplete, navigation, or code refactoring capabilities. These are essential tools when developing complex applications. In a way, TypeScript extension forces developers to use good practices and helps to create projects with clean and understandable code. It helps to detect and eliminate common errors while writing code, which is especially important for large projects.

The Angular environment is pre-configured, which greatly speeds up programming and makes testing easier. The default configuration makes it possible to start working immediately after launching the application.

Every month there are more and more new applications built using this framework, including those built by the largest technology companies in the world:

Angular’s component-based architecture is its main differentiator from other frameworks. All components are organized into NgModules, which define the entire Angular platform. Each Angular application consists of a core module for initial loading and multiple function modules.

Individual components can be thought of as small UI elements, such as an application section. A component in Angular consists of a class file, a template (HTML template) and a css/scss file. In Angular, there is a strict hierarchy of components that are limited by their functionality. Examples of components introduced in the latest version of Angular 9 are Google Maps and YouTube Player.

All components can be used multiple times, in different places of the application. They are completely independent of each other, which means that they can also be independently tested. Thanks to the component-based approach, applications developed with Angular are characterized by extremely high performance and “testability”.

Angular is a modular framework. Each module consists of individual building blocks, such as components, directives, pipelines, and services, which are related to the application and together determine its functionality. Angular provides developers with many built-in, pre-built modules.

Modules, components, and services are component classes that use decorators that, using metadata, send information to Angular about how to use them.

Angular template directives are responsible for all the logic of the framework. The tags, on the other hand, link the data of the application under construction to the DOM. Thus, the Angular platform effectively prevents DOM manipulations and affects the ease of application testing.

Angular is a technology that is highly valued in the programming environment and has gathered around it a large community. In particular, Angular is appreciated by front-end developers. Thanks to it, they can create an impressive visual layer of web applications. This framework will prove itself primarily in the implementation of large and complex projects.

If you’re still not sure what technology will be best for your project or you’re looking for programmers to implement it – feel free to contact us! We will be happy to suggest solutions that will be optimal for your web/mobile project. If you would like to know more, see how we build web and mobile applications.

This site uses cookies to provide services at the highest level. By continuing to use the site, you agree to their use. Read moreAgree