For more than a year now, company conferences, workshops, trainings, but also daily team meetings have been held almost exclusively online. International business had very little time to get used to the new situation and, above all, to prepare the appropriate technological facilities. Did we pass this test? Well, so far most of the companies, including companies like ours, are still operating – we have not lost contact with each other, we can organize our work ourselves, we have meetings with clients, we train and work together. All this would not be possible if it wasn’t for instant messaging, which has become one of the leading tools in our daily work. To say that without them we can’t function is like saying nothing at all.

We will start with Slack, as it is the tool we use most often in Da Vinci Studio. We like its friendly interface, we appreciate it for the possibility of creating many completely different channels (both public and private). Above all, however, we like its versatility, as it takes care of both voice calls and video conferences, as well as file sharing. Besides being used for communication, Slack itself is perfectly communicative. You can tie it to many useful applications, such as Office 365 or Google Drive. ). Importantly, it is an extremely structured and clear tool that is really hard to get lost in.  The only problem for some users may be lack of Polish version, but we somehow manage without it.

Ryver is an application less popular than Slack, but very similar to it. We know those who believe that in some respects it can surpass its famous “colleague in the trade”. What might actually lead one to make such a statement is the unlimited storage space. That’s a really big deal – especially today, when data storage and sharing is a serious part of most companies’ daily operations. Like Slack, Ryver allows for both text and audio conversations, as well as video. Users have access to the entire conversation history, and a search engine helps in finding specific threads. The app can be used by users of: Windows, iOS, Android, Mac and Linux, iOS or Android. Will there be any spoon among this sweetness? Of course! Ryver’s interface is definitely less friendly than the one used in Slack, which makes it have a rather high entry threshold for many people.

Good old Skype – for years it has been used to make audio and video calls (texting is also possible). Users around the world got used to its uncomplicated operation, the ability to make phone calls, send text messages and record conversations. However, it is difficult to recommend it for work in a company – especially in a larger one. Organizing videoconferences or data exchange are not the functions, for which the old-fashioned Skype is usually recommended. It is recommended mostly for small group conversations. It is also great for lessons or tutoring.

If we are talking about business and its needs, Microsoft Teams is much better in this area. In the category of acceptable number of callers, it is a very strong competitor. One group can range from 10 to 10,000 participants! Meetings and conferences in large numbers are made easier with the raised hand symbol sign-in feature. This allows for discipline during particularly heated debates. One of the biggest advantages is the ability to share the screen with other meeting participants. Thanks to this we have a chance to feel at least a substitute of teamwork in the office.

Last but not least, Zoom – the application that has probably benefited the most from the current situation. Since the beginning of the pandemic, it has outclassed both Google, Skype, and Facebook! In the fourth quarter of 2020, Zoom Technologies reported $882 million in revenue, quadrupling the results for the same period last year! What is the secret of this success, since Zoom offers virtually the same capabilities as the aforementioned apps? We can use it to hold video conferences, meetings, or conversations in smaller groups. We can share the screen with other participants, and the moderator has the power to give the floor to those who agree and mute those who are rude. What else? Well, Zooma’s success is not due to its cosmic multifunctionality, but to its focus on one most important function and bringing it almost to perfection. It is, of course, about video conferencing, in which Zoom currently seems to be the best. What’s more, this is the app that works when the others get off the hook. Seriously! The free version allows you to meet up to 100 people without recording (you have to pay for this pleasure). Zoom works on Android, Windows, iOS, macOS, and in a web browser. 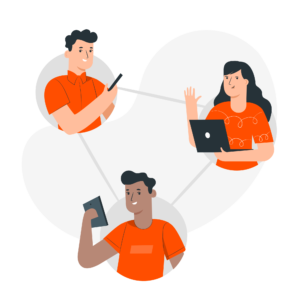 The era of the communicator

An exceptional situation, even the most difficult one, can often be the engine for creating new and better things, often great and groundbreaking. The experience of the past year leads us to believe that when it comes to applications that allow us to contact and work freely wherever we are, the first few words have barely been said. We don’t know what the post-pandemic world will look like and when that “post-pandemic” will happen. What we can be sure of, however, is that “home office” has forever moved out of the category of exotic, not necessarily welcomed modes of work. We have learned to do our duties from home, we have trusted ourselves and our co-workers in this matter. In the meantime, communicators will continue to evolve at an accelerated pace giving us more and more freedom and making this ever smaller world smaller.